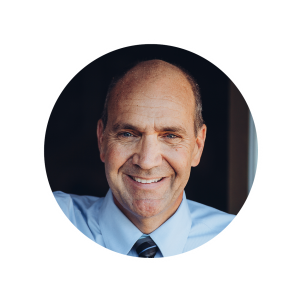 I normally refrain from public commentary on the subject of politics, especially the kind in which we have been recently emersed.

Recently, on the news, conservative commentator Britt Hume said something that prompted me to write. “I remember,” Hume began, “the turmoil and the rhetoric in our country during the Vietnam War. It was terrible. But this is worse. This is as bad as it gets. It hasn’t been this bad since the Civil War.”

Most people I talk to are seriously concerned about what might be ahead for our nation. We all see the dangerous road we are on. We all feel the car careening towards an abyss with no one at the wheel.

For that reason, I offer a perspective, and some advice, from one small voice.

In the chaotic exchange of vitriol that seems to define public discourse these days, there is one comment we hear over and over: “We are a nation that can never accept violence as a solution to our problems.” I hear it over and over in the media and from the lips of our national leaders. Especially this week after what happened in Washington DC.

But the truth is, this patronizing statement is a lie. The United States is one of the most violent nations on earth. We are guilty of murder in our towns and cities. We have one of the highest murder rates on earth. We kill our unborn by the millions because they are an inconvenience. We sensationalize murder on television, in books and magazines, and in the movies. 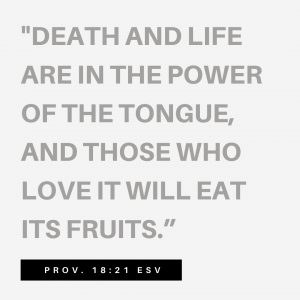 And we kill people with our words. As Proverbs aptly declares, “Death and life are in the power of the tongue, and those who love it will eat its fruits.” (Proverbs 18:21 ESV). We, and I mean millions of American citizens, brazenly vomit verbal abuse on their fellow human beings by means of social media. Now too, on a national level through our media outlets, our leaders and public servants shamelessly murder each other with their words.

Some – both citizens and politicians – use vicious words simply for the dark pleasure of seeing what reaction they can provoke. The rhetoric, and their retorts, are like people who light fires while others throw on gasoline. Journalists disparage, sensationalize, and mock their ideological enemies. They script verbal violence in newspapers and talk it on television. Our political leaders verbally destroy each other in the halls of power in front of a global audience… all the way up to the highest offices of government.

These are the people who set the example for us. We are fed this toxic diet every day. 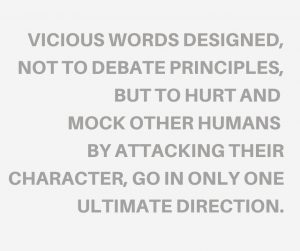 If we learn anything from history, we must learn this: Violent words lead to violent actions. Vicious words designed, not to debate principles, but to hurt and mock other humans by attacking their character, go in only one ultimate direction. Like thunder follows lightning, those who engage this kind of behavior will eventually see knives and guns come out. This is the story of human history. Unfortunately, our nation now blindly speeds down this dangerous road.

To make the claim that, as a nation and people we abhor violence is consummate hypocrisy. We are swimming in a sea of violence, and the blood-splatter from multiple verbal murders permeates our souls and our culture. We should not therefore be surprised when actual violence and bloodletting explodes around us.

That our nation is ideologically polarized is self-evident. But now, we have drifted from the moorings of common decency that formerly helped us discuss our differences. We have sown to the wind and now we are reaping the whirlwind.

This I believe: At its core, sound ideology is founded on common decency. The two are inseparably intertwined. In short, we cannot claim to be a nation that abhors violence when we push an ideology or a position by means of verbal toxicity and the rhetorical assassination of our opponents. In other words, ideology loses its credibility and its merit when it is communicated without the temperance of common decency.

John Adams, one of the Founders of this nation, said, “Our Constitution was made only for a moral and religious people. It is wholly inadequate to the government of any other.”

So, what are we to do? Are we to watch our nation self-implode and descend into an abyss of violence and cruelty? It is my firm belief that change must come to us or that abyss at the end of the road is our inescapable future. 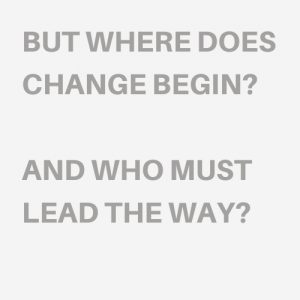 But where does change begin? And who must lead the way?

The short answer is: Change must begin with me. By that I mean, as a Christian, change must start in my house. Change must begin in the community of people that I call home. The Apostle Peter poignantly observed, “It is time for judgment to begin at the household of God.” (1 Peter 4:17 ESV).

Peter leads these words with sober instruction: “… let none of you suffer as a murderer or a thief or an evildoer or as a meddler. Yet if anyone suffers as a Christian, let him not be ashamed, but let him glorify God in that name.” (1 Peter 4:15-16 ESV).

In other words, Peter challenges Christians about their behavior! “You should not be suffering,” Peter declares, “because you are guilty of murder. If you suffer, it should the kind of suffering that results from following Jesus and public living as a Christian.”

Jesus said, “Do not resist the one who is evil. But if anyone slaps you on the right cheek, turn to him the other also.” (Matt. 5:39 ESV). What if just one of our political leaders engaged their debates in this way? What if their ideology demanded common decency as a primary rule of engagement? What if they refused to mount the toxic bully pulpit, and insisted on restraint and respect in all public and private concourse, and demanded the same from those around them? 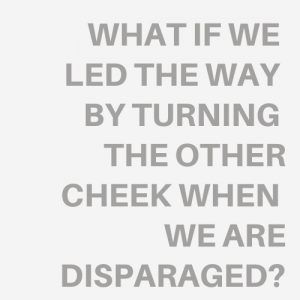 What if we led the way by turning the other cheek when we are disparaged? What if we employed a gentle answer and by it “turned away wrath” (Prov. 15:1 NIV)? Regardless of what our national leaders do, Christians must pray for our leaders, and exemplify this behavior. Our ideology in fact demands common decency. If Jesus Christ taught us anything, He taught us to live and die for these beliefs. I repeat, we will LIVE and we will DIE for these beliefs. But we will NOT KILL for them! Our ideology demands common decency. And, if death is our only option, we will die before we will sacrifice common decency. We can never point a judging finger at our leaders if we are not living this kind a life… defined by Christ’s example.

It IS time for judgment to begin at the household of God. I hope our nation can turn before we plunge off an abyss. This is my hope and my earnest prayer. But, come what may, I have decided to follow Jesus.